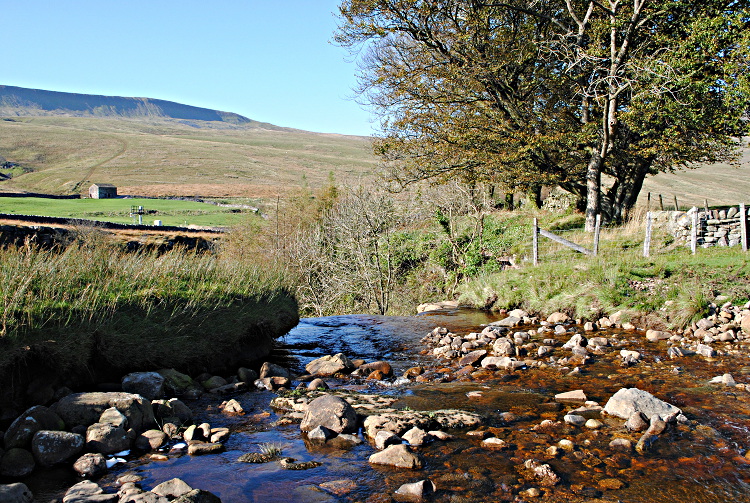 If you ask in Brough where Hellgill is you might just be misunderstood and be pointed up behind the village towards Hall Fell. There’s Hellbeck Hall up there and there’s a civil parish called “Hellbeck”. But that’s not where we’re going today. If you clarify your question you might then be told, “Oh, you mean Hellgill up Mallerstang”. This is to the south of Kirkby Stephen, out past Nateby, up the valley with the Carlisle-Settle Railway climbing on our right, along the road toward Hawes and Wensleydale, and stopping at the county boundary between Cumbria and North Yorkshire. I’ve sometimes wondered why Margaret Shepherd’s excellent study of the 19th century economy of the Upper Eden Valley, ‘[easyazon-link asin=”1902806328″ locale=”uk”]From Hellgill to Bridge End[/easyazon-link]’ (that is, from Mallerstang to Brough) wasn’t titled, “From Hellgill to Hellbeck”, but maybe that would have been too much of hell for such a paradisical area. 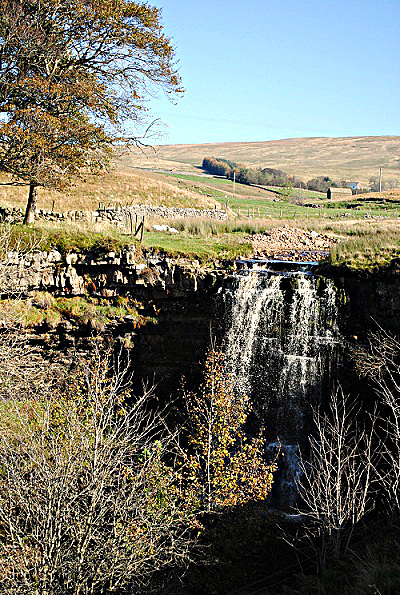 Anyway, now that we’re in the right place we’re not far from the source of the River Eden which rises on the heights above the Mallerstang valley and flows gently down a gradual slope … until, suddenly, it drops off the edge at Hellgill Force.

This area is popular with walkers. We’re just to the south of the North Pennines AONB (Area of Outstanding Natural Beauty) and right up against the edge of the Yorkshire Dales National Park.

Less than half a mile upstream at Hell Gill Bridge the popular walking route, [easyazon-link asin=”095599876X” locale=”uk”]Lady Anne’s Way[/easyazon-link], crosses the stream. It then descends into the valley toward Thrang Bridge and Pendragon Castle (one of Lady Anne Clifford’s 17th century castle restorations, but again in ruins) following the line of the ancient “Highway” from Wensleydale to the Eden, a route used even before the Romans came. Alternatively you can walk the heights along Mallerstang Edge with its great views of the valley and of Wild Boar Fell on its western side.

At this stage, except after heavy rainfall, the Eden is no more than a minor beck indicating nothing of what eventually it will become. Gradually, as it proceeds down the valley it picks up a series of other becks until before reaching Kirkby Stephen it truly is a river.

How to reach Hellgill Force

Hellgill Force is close to the B6259 which climbs southwards up the Mallerstang valley from Kirkby Stephen. From Sedbergh or Hawes take the A684 and turn north onto the B6259 at the Moorcock Inn. Park by the county boundary signs (avoiding the areas by the cottages marked No Parking) and follow the track over the Settle-Carlisle railway bridge. If you’re walking Lady Anne’s Way, you can drop down for half a mile or so from Hell Gill Bridge and then either retrace your tracks to the bridge or follow the road down past Aisgill to The Thrang and pick up the walkers’ route there.

There are scattered inns, farms and cottages offering B&B in the area between Hawes, Sedbergh and Kirkby Stephen. Or you could choose to stay in one of these towns. Here are some selections centered on those three small towns, and also Appleby which is on the Eden a few miles further downstream. If you’re planning to explore the Eden Valley then Kirkby Stephen and Appleby are probably your better choices as the river passes through both. Hawes is in Wensleydale and Sedbergh in the catchment area of the Lune, on the River Rawthey next to the Howgills; both of these towns are in the Yorkshire Dales National Park even though Sedbergh is actually in Cumbria (oh, and has a Lancashire postal address – just to confuse everyone!).