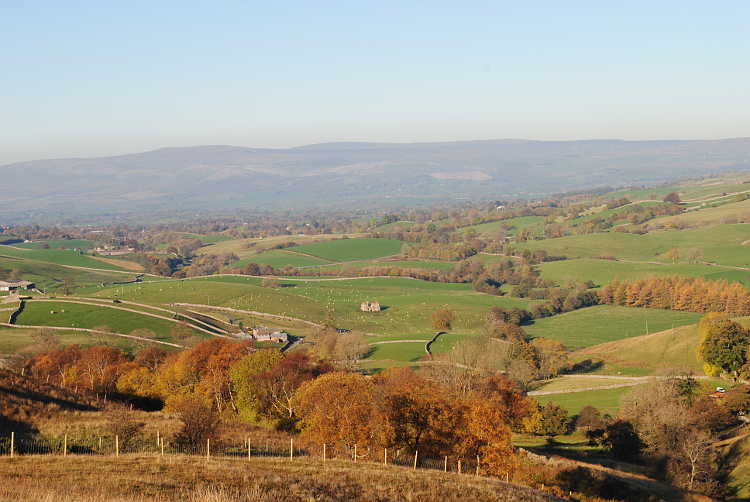 Looking down on the Upper Eden Valley on an Autumn Afternoon 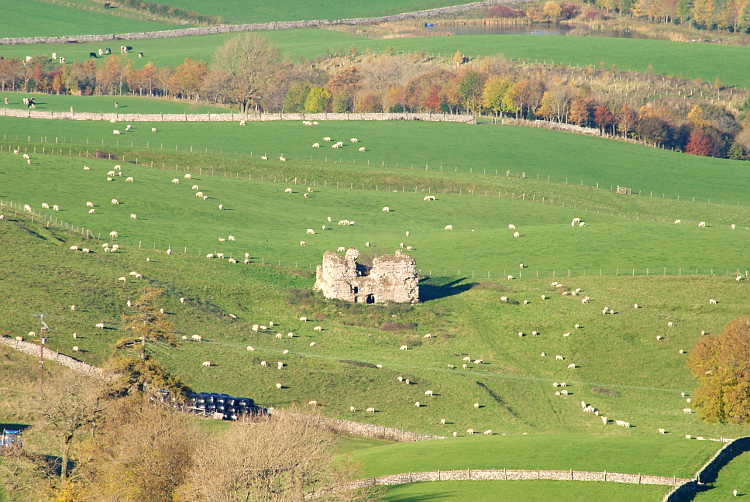 Looking down to Lammerside Castle from the South (with long lens)

It’s Saturday morning and the snow has mostly gone (for now) but here are some upper Eden Valley shots from Thursday morning taken from, or close, to the roadside on the A683 between Kirkby Stephen and Sedbergh, including Mallerstang and also one of the Howgills. But first the view from my desk that morning of the still snow-covered fells above Hartley. 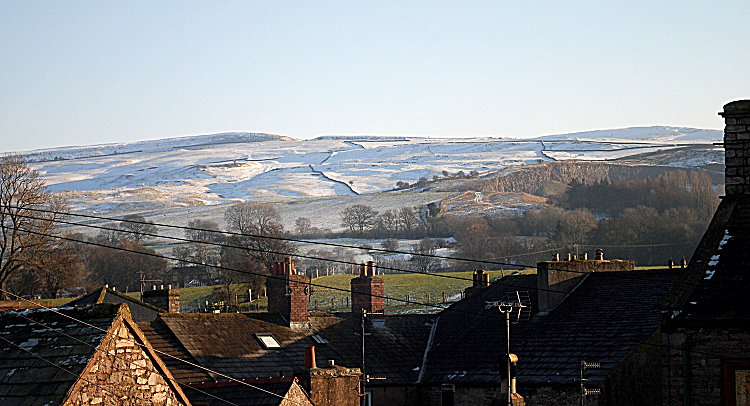 Snow on the Fells above Kirkby Stephen – View from my desk

I’ve driven over the Sedbergh road several times in recent weeks. There are some great views over Mallerstang, round to Wild Boar Fell, and then toward the Howgills. On Thursday morning I stopped several times to capture something of the snow before the promised (threatened?) rain washed it away. It was just as well that I did because by Friday morning the scene was very different with the re-emergence of green. 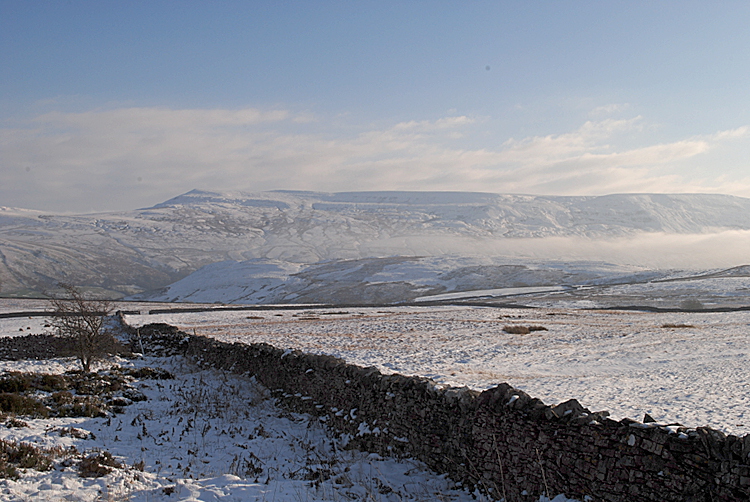 I was fortunate in being there for a short period between very misty and very cloudy. This first shot, looking east, shows a layer of mist over the Mallerstang valley behind Birkett Common, and with Mallerstang Edge rising above it. Then the sun strengthened as thin cloud drifted away and I walked back to a spot where I’d been fifteen minutes earlier to get this next shot. 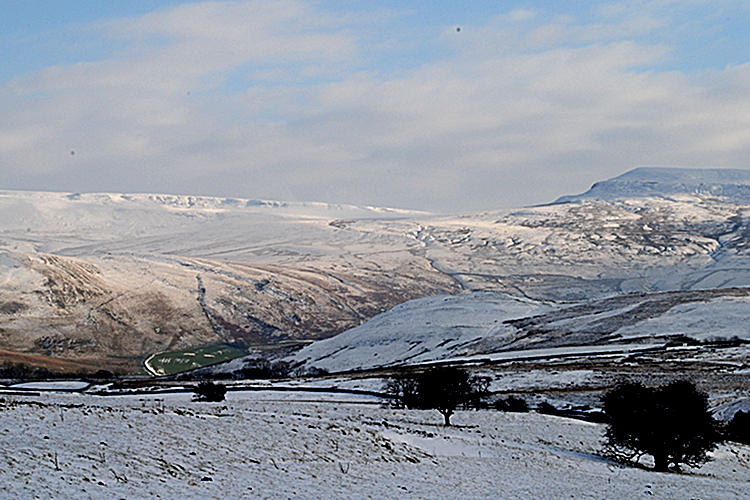 There is one point on the Sedbergh road from which you can catch a glimpse of the River Eden in the distance as it emerges from Mallerstang, winding around Birkett Common on its way to Kirkby Stephen and beyond down the Eden Valley. It is just visible in the above shot.

Invisible from here, almost in the foreground but hidden by the rolling terrain, is the Settle-Carlisle railway line. A little beyond it is Lammerside Castle, but again, not quite to be seen from here.

The Howgills – They’re not in the Eden Valley are they?

It would have been good to drive down from this high spot into the valley itself but the clock was catching up on me. I did, however, stop once more along the road to get a distant view of the Howgills in the west. The clouds looked as though they were going to beat me to it and turn everything into dismal grey but before that happened I managed to catch this one.

Snowy Howgills from the north east, seen from the Sedbergh to Kirkby Stephen road

You might, of course, ask, “Why put a photo of the Howgills on an Eden Valley web site? Don’t the Howgills belong to the River Lune and Lonsdale?” Well yes, to a large extent. In fact more than ninety percent of the water falling on the Howgills flows down into the Lune either directly or via the River Rawthey. But, in this top north east corner several Howgill streams, such as Thackthwaite Gill and Artlegarth Beck, run off the fells into Scandal Beck … which runs down through Ravenstonedale along Smardale Gill to Soulby and the River Eden. I would have liked also to get a snowy shot of Wild Boar Fell, where the infant Scandal Beck rises, but misty cloud defeated that attempt. Maybe another day if the snow returns.

Visitors to Kirkby Stephen are often surprised by a sudden loud harsh noise above them. No, I don’t mean the RAF’s jets screaming past. It’s a bird-like noise but not the kind you’d expect to hear from most native English birds. It’s harsh, grating, and it makes you look up suddenly. Those who are quick enough might catch a glimpse of green or gold as a large bird with long tail sweeps across the road to perch on a chimney pot. 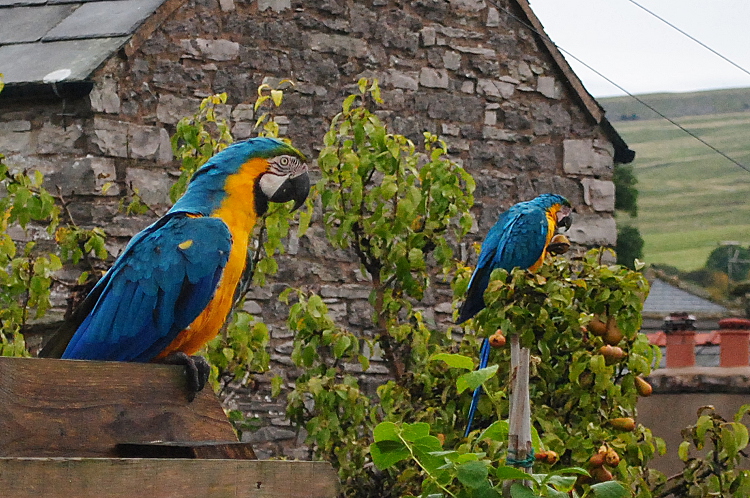 These are the Kirkby Stephen parrots and a couple of days ago I caught this quick shot through our lounge window, catching the culprits red-handed. Or should I say red-beaked? “Culprits” is the right word here too. The thief in the further distance had for the past five minutes been gorging on our neighbour’s pears. 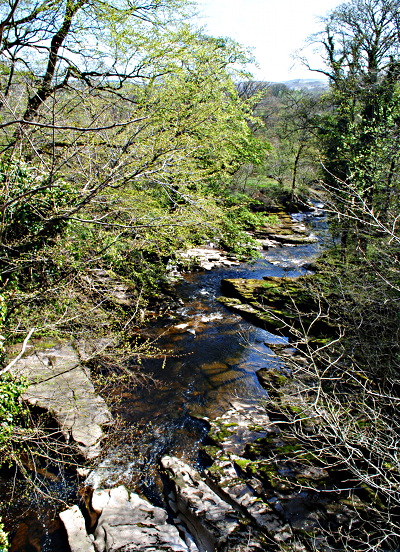 Stenkrith Bridge, just outside Kirkby Stephen on the road to Nateby, is actually a combination of several bridges where the Eden both bends and falls: road bridges and footbridge, over river and (former) railway track; plus the remains of the old railway bridge over the river, of which only the foundations survived the line closure.

We’ll start by taking a look (here on the left, just as the buds of Spring are bursting) downstream from the Millennium footbridge. This is a spectacular spot, reminding me somewhat of one of my favourite places in all the world outside Cumbria, the Aberglaslyn pass in Snowdonia.

We’re at the point where the limestone fells end and the scenery is shaped by the red Eden Valley sandstone. Under the bridge we’ll see the rocks have been carved into grotesque shapes by countless centuries of pounding water. 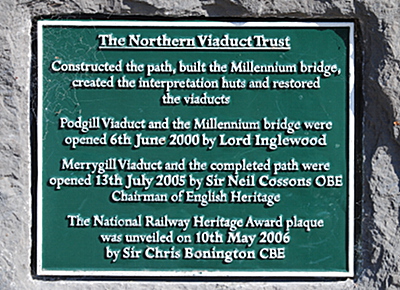 We’ll go back now to the little carpark. As we go through the gate onto the footpath there’s an informative plaque describing the work here by the Northern Viaduct Trust which has been responsible for the restoration of several of the historically important viaducts that escaped the wanton destruction of the early years following railway line closures in the 60s and 70s.

Following the path down to the railway track level and walking under the roadbridge we cross the Millennium footbridge and go down to the river’s edge. Here is the view of the two bridges looking back upstream. 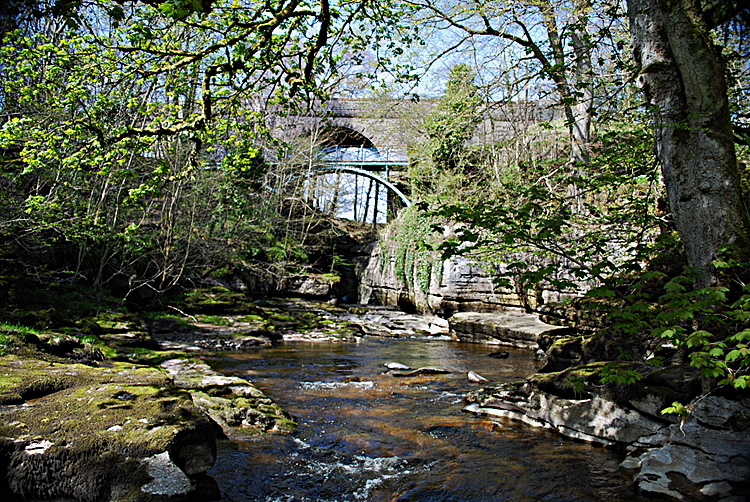 Climbing back up to the road we find another way down to the river on the upstream side. A narrow gate on the opposite side of the river from the carpark gives access to steps down to a path leading to the foot of the old railway bridge foundations and then out into the fields on the other side. 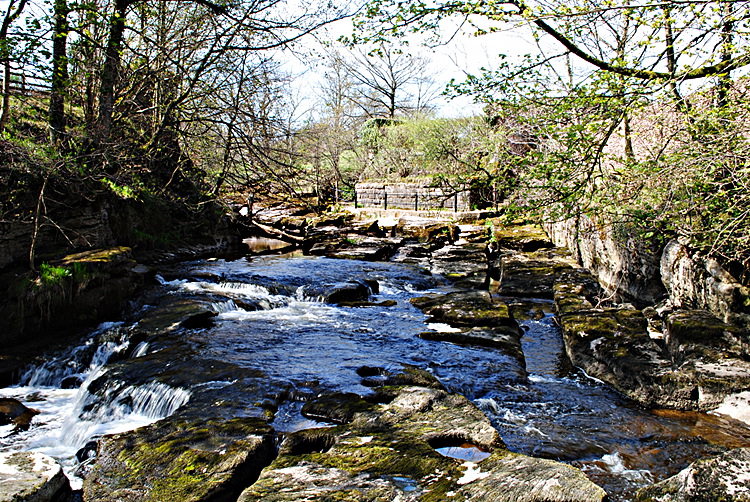 Looking back to the bridges it seems that in the past here has been another arch, now bricked up. These Eden bridges sometimes have complex histories, and in this case the combination of gorge, river, road and railway on a double bend in the stream leads inquisitive minds like mine to wonder what were the various stages of change over the centuries. 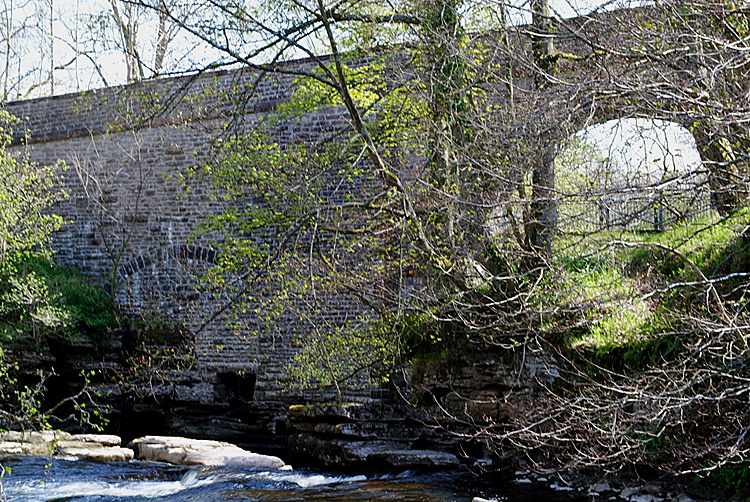 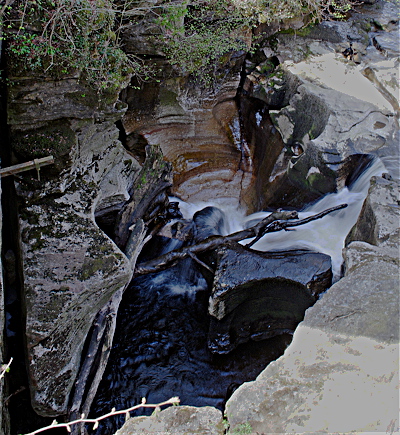 Early on in this note I mentioned the grotesque rock shapes. Here is a shot looking downwards from the Millennium footbridge. The colours range from greys to reds to almost black. Certainly there’s a combination of sandstone and limestone here. I’m no geological expert; is there granite too?

As soon as the leaves on the trees are fully grown these views will be different, with less of the bridgeworks visible. Whatever the time of year this is a beautiful spot, and the starting point for some excellent walks for which the car park is a great advantage.

If you’re in the Kirkby Stephen area don’t miss at least a stroll in the woods by Stenkrith Bridge. 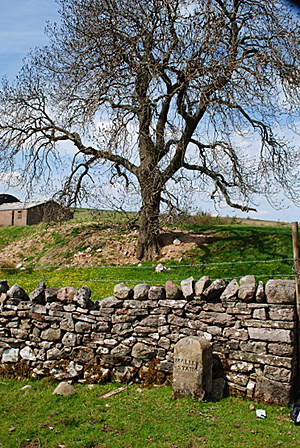 Mention the two words Mallerstang and Castle, and the majority of people who have visited the area will immediately think of Pendragon Castle, one of the favourite places of the great Lady Anne Clifford.

Driving, cycling or walking up to the Mallerstang valley from Kirkby Stephen and Nateby, however, long before we reach Pendragon we pass Lammerside Castle to the right. The first photo here shows the ancient Mallerstang boundary stone against the wall just beyond the cattle grid at the entrance to the expanse of level ground by the river, known as Birkett Bottom.

From here, looking up the valley we get a good view of Mallerstang Edge, rising to around 650 metres, beyond the farm buildings at Dalefoot. To the right, just out of the picture, Birkett Common reaches just over 350 metres, or about 450 feet above the river level. This is a rare patch of flat land on the east bank of the stream. 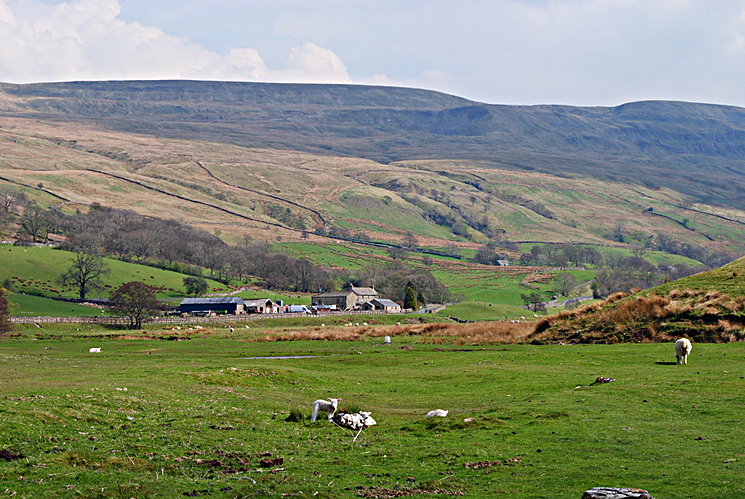 If you walk a little onto the level grassy area and turn around you see in the distance, beyond the farm buildings, what might at first seem like a broken down shepherd’s hut. Not one bit of it! This is what [easyazon-link asin=”0300126638″ locale=”uk”]Pevsner[/easyazon-link] describes as a 14th century pele tower, but how much further back does it go into the mists of ancient time? This is Lammerside Castle.

What isn’t obvious on this photo is that the river is between you and the castle. To reach it we must first return almost to Nateby, and take the Bridle path to Mire Close Bridge, go over the bridge and follow the waymarks to the left. It’s not always totally clear where the path actually lies. By keeping close to the fence that follows close to the river we come eventually to a gate and using only the OS map we become more confused as this gate does not carry a waymark sign. If you’re following a walking guide such as Ron Scholes’s [easyazon-link asin=”185058978X” locale=”uk”]Walking in Eden[/easyazon-link] you’ll be less confused because more detailed instruction is given than can fit on an OS map.

Confused or not, the view from here is glorious. The following shot was taken from the gate. With the Eden down below, Birket Common in front and to the right, with the tops of Mallerstang behind and to the left, this to my mind is one of the best view points for miles around. 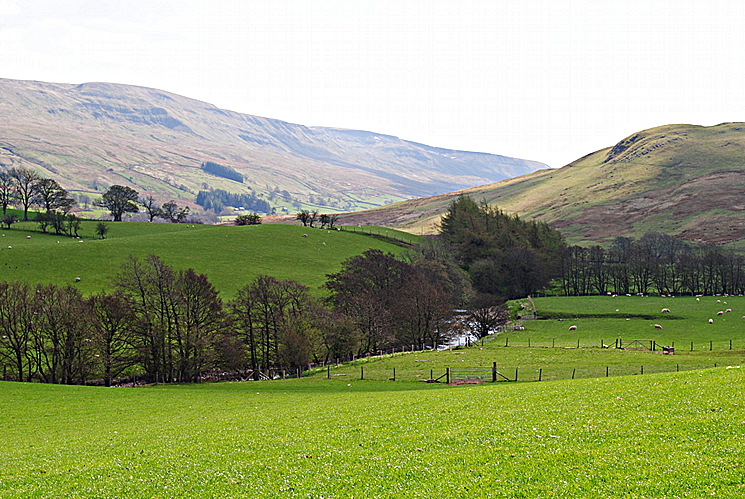 But where is the castle? Turning about ninety degrees to the right, it’s there in the distance, at times in the shade almost invisible against the pattern of woodland on the more distant fellside.

Here’s the same view through a longer lens. 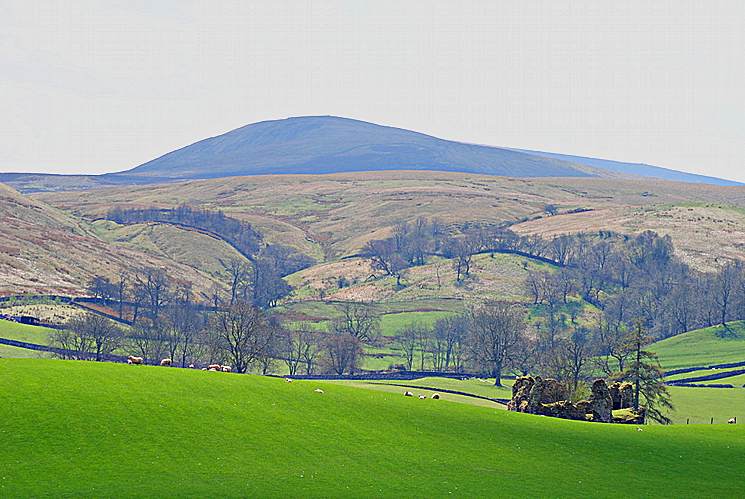 So on we go, and after several more fields and several more gates (all thankfully waymarked now) we’re faced with a somewhat grotesque ruin. 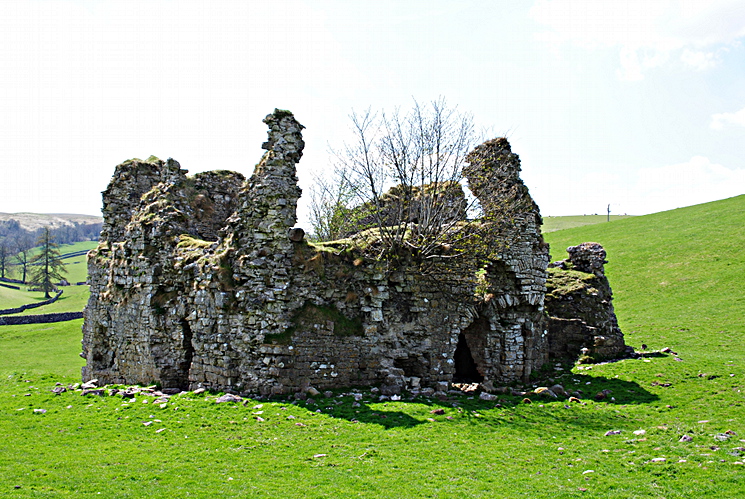 Moving round to look at it straight on we see that it is possible to walk right through to the other side. Being at the time more interested in external photographs I didn’t go inside and am now regretting it. [easyazon-link asin=”0300126638″ locale=”uk”]Pevsner[/easyazon-link] says that the tunnel-vaulted rooms are similar to those of Burneside Hall near Kendal – in which I have a particular interest because my 3xgreat-grandfather farmed there in the mid 19th century. Clearly another visit is called for. 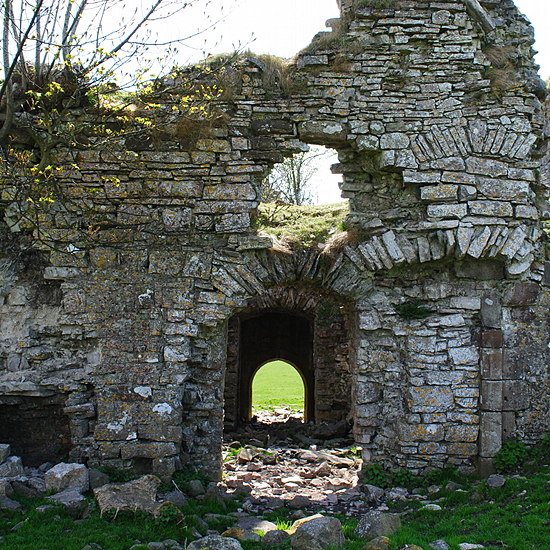 What is known about Lammerside Castle?

Actually, very little seems to be known. It was for a time the seat of the Wharton family who in the 14th century built Wharton Hall, which we’d have reached if at Mire Close Bridge we’d turned right instead of left. The castle seems to have been a ruin for several hundred years. As at Warcop there appear to have have been comings and goings between the Warcop and Wharton families. Warcop Hall was at one time known as Wharton Hall, and Lammerside was in the early 15th century the home of Thomas de Warcop who was involved in the abduction and marriage of nine-year-old Margaret Sandford – all a matter of the inheritance of various Westmorland properties; the best account of this scandalous incident that I’m aware of is on the History of Parliament site. 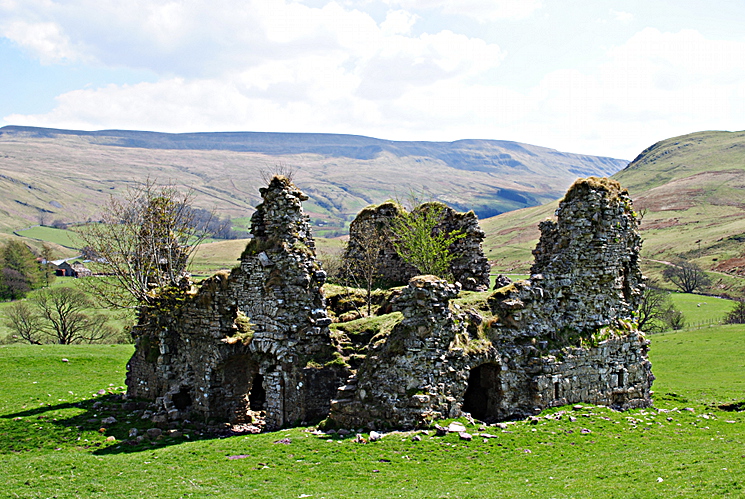 An interesting account of Lammerside Castle is given here, and aerial photography showing how extensive the building may once have been is found here.